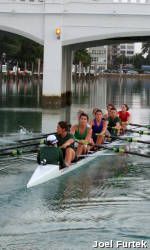 Oak Ridge, Tenn. – The University of Miami rowing team concluded its season on Sunday afternoon, taking part in four final races at the Aramark Sprints in the South/Central Regional Championships on Melton Lake in Oak Ridge, Tenn. The Hurricanes finished with 64 total points to finish seventh in the South Region.

Miami had four crews racing in the finals of their respective divisions on Sunday, including the Open 4+ and Varsity 4+ for the `Canes.

Miami began the day with the crew of Nicole Miller (bow), Molly Beigelman (2), Stephanie Kane (3), Natalie Snyder (stroke) and Alexa Romero (coxswain) for the finals of the Open 4+ competition. The crew turned in a third place time of 8:46.1.

In Varsity 4+ action, UM turned in a time of 7:59.7 in the “C” finals. That was good enough for a sixth place time, finishing more than 10 seconds ahead of Eastern Michigan. Miami rowed the crew of Amanda Zacharkiewicz (bow), Kate Hall (2), Julie Creamer (3), Morgan Visalli (stroke) and Heather Hollembeak (coxswain) in that race.

For UM interim head coach Boban Rankovic, the best race of the day may have come in the Second Varsity Eight. That’s where the `Canes produced a time of 6:45.9, finishing fourth overall–and head of crews from SEC power Alabama, as well as Kansas State of the Big XII.

The final race of the day for the `Canes took place in the Varsity Eight, where UM rowed the team of Kate Rickers (bow), Rchael Sporko (2), Karalyn Van Aken (3), Sarah Medland (4), Monika Sajincic (5), Stephanie Parrish (6), Emily Wingrove (7), Molly Thornton (stroke) and Christina Crocco (coxswain) to a time of 6:37.25 in the “C” final.

This was the most races for UM in the Aramark Sprints of the South/Central Regional Championships in more than two years.

Virginia took the top score for the South Region to claim the title with 387 points, while fellow Atlantic Coast Conference (ACC) member Clemson took second place in the region with 311 points. UCF took third place for the region with a distant 204 point total.

Michigan claimed the Central Region title with 348 points, edging Ohio State who finished in second place with 328 points. Wisconsin was just behind them with 321 points to round out the top three teams in the Central Region.

For more information on the South/Central Regional Championships, as well as up-to-date schedules and standings, please visit www.hurricanesports.com.