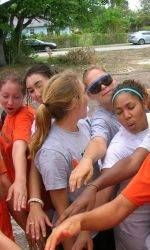 Lilly Izaguiere, the Development Director for Habitat for Humanity of Miami, has played an integral part of the organization that has enabled them to build over 700 homes in the South Miami area.

“We give future homeowners a loan at zero percent interest because we are a biblical organization,” said Izaguiere. “So, the principle is that you lend money without charging interest. They pay back the cost of the home, and that money goes into a larger pot to continue construction on future homes for future homeowners.”

Building in Miami over the last two decades, Habitat for Humanity builds structures in low-income communities in South Florida such as areas of Liberty City, West Perrine, Homestead, Overtown, and Little Haiti.

The last few weekends, UM student-athletes participated in Liberty City to help construct a three-bedroom home for the Flennory family–who has lived in the Liberty City area for a number of years. Members of the swimming & diving and soccer teams were on hand the first weekend. This specific project is part of the “Habitat for Humanity Women Build” program. The first women-build house was put up in 1991 in Charlotte, N.C. Since that time, the foundation has helped to build more than 1,400 homes nationwide.

“When we first got here, Lilly read one of the stories in the Bible,” stated UM student-athlete Brittany Viola, 2009 ACC Champion in diving. “Basically, it was about people serving others for someone else’s needs. In turn, that will provide someone to service our needs in the future. It’s been an experience to get closer with my teammates, and get together to help someone else.”

The efforts of the organization, as well as the extensive amount of volunteers over the years, have not gone unnoticed. The South Miami affiliate of Habitat for Humanity is amongst the Top-20 among more than 2,000 participating Habitat affiliates nationwide.

“It’s a really good opportunity for student-athletes to meet people and hear their stories,” added UM soccer’s Vikki Alonzo, a freshman goalkeeper. “I just wanted the opportunity to help build something for someone I didn’t know.”

The University of Miami and its athletes have long been involved in the local community, whether it is a mentoring program, a summer workout program, or an event like Habitat for Humanity. Head swimming coach Christie Shefchunas, now finishing her third year at UM, was alongside her team to take part in the event.

“I think it is an amazing thing to give people that are in need a shot at owning their own home,” expressed Shefchunas. “I’m really proud of the girls for stepping up. I think once a year I would like to do something like this. It’s a way of giving back to the community.”

This past Saturday, members of the women’s basketball, volleyball, and rowing teams continued the efforts set forth by swimming & diving and soccer.

“It was great knowing that we gave back to the community, and helped with the building of a new home for a single mother of three,” said Cassie Loessberg, a junior on the UM volleyball team. “She was actually right beside us hammering nails and working hard, which was inspiring. It made the entire experience worthwhile.”

Junior Charmaine Clark, a member of the women’s basketball team was also on sight to help with the project.

“The feelings of helping someone experience their dreams come true is priceless”, said Clark.