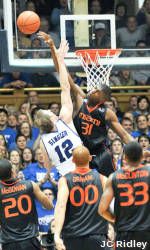 CORAL GABLES, FLA. – The University of Miami men’s basketball team will play host to Minnesota in the 2009 Big Ten/ACC Challenge on Wed., Dec. 2, at the BankUnited Center. Time and ESPN network coverage is to be determined.

It marks the fourth time that Miami will be participating in the Challenge – and the second-straight season at home – with appearances in 2005, 2006 and 2008. Minnesota has played in all 10 previous Challenges, defeating Virginia on the road last season. It marks the first meeting between the Hurricanes and the Gophers.

“We look forward to both participating and hosting another game in the Challenge,” said Miami head coach Frank Haith, who has guided the Hurricanes to four postseason appearances in five seasons at the helm. “Having the opportunity to once again compete versus a power conference team on the national stage is step forward in the evolution of this basketball program and will certainly be a highlight to our non-conference schedule.”

The Hurricanes return to the hardwood next season following their 2008-09 campaign in which they finished 19-13, advancing to their second-straight postseason. The Gophers went 22-11 in their second season under head coach Tubby Smith, falling to Texas in the first round of the 2009 NCAA Tournament.

It marks the 11th year for the event, featuring the top college basketball programs playing for conference supremacy and the Commissioner’s Cup on ESPN, ESPN2 and ESPNU. ESPN360.com, the broadband sports television network from ESPN, will simulcast the ESPN and ESPN2 telecasts. The ACC has won the Commissioner’s Cup in all 10 previous years. The 11 games will take place on the Monday, Tuesday and Wednesday after Thanksgiving (Nov. 30-Dec. 2), with game times and network coverage to be determined.