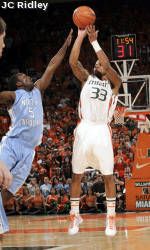 McClinton to Compete in 3-Point Shootout

CORAL GABLES, FLA. – The University of Miami’s Jack McClinton has accepted an invitation to compete in the 21st Annual College Slam Dunk and Three Point Championships in Detroit leading into the NCAA Final Four.

“It’s an honor to be recognized as one of the top shooters,” said McClinton, who just wrapped up his final season with the Hurricanes. “I love to compete with the best so I think it will be a lot of fun.”

The competition will be held in conjunction with the women’s three-point shootout and the men’s slam dunk contest, beginning at 7:30 p.m. at the Palace of Auburn Hills in Detroit – site of the 2009 NCAA Final Four. Tickets, which begin at $5 for kids and students and $10 for adults, are available through Ticketmaster.com.