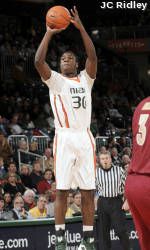 ATLANTA, GA – The 2009 recipient of the “Bob Bradley Spirit & Courage Award,” presented by the Atlantic Coast Sports Media Association (ACSMA), is Adrian Thomas of the University of Miami.

Thomas, a 6’7 junior forward from Pembroke Pines, FL, will receive the award at halftime of the Hurricanes’ ACC Tournament opener against Virginia Tech on Thursday (March 12).

The Bradley Award, named in honor of the late Clemson University sports information director who passed away in 2000 after a three-year battle with bone cancer, was established by ACSMA in conjunction with the ACC in 2006. It is awarded annually to a male or female basketball player, coach or team administrator who has overcome significant injury, illness or adversity in life to become a valuable contributor to his/her program and university.

Thomas has battled back from season-ending injuries twice in his Miami career. Two years ago his sophomore season was halted by an abdominal injury that led to him redshirting during the 2006-07 campaign. His career was interrupted again in November of 2007, this time by a torn ACL in his left knee. He appeared in a total of just eight games in those two seasons.

This year Thomas has regained his role as a key contributor to the Miami cause by playing in all 29 contests and averaging 5.0 points per game (and 6.8 ppg versus ACC opponents). He is one of the squad’s top three-point shooters (at 37%) and during one stretch connected on at least one “3” in 14 straight contests, including four against Wake Forest as part of a career high tying 14-point effort. He has scored in double figures five times – all in ACC play.

Thomas is on schedule to graduate this spring with a double major in business administration and marketing.

Previous recipients of the “Bob Bradley Spirit & Courage Award” are Tony Bethel of NC State in 2006, coaches Debbie Ryan of Virginia and the late Kay Yow of NC State in 2007, and Matt Zitani of Florida State last year..

Bob Bradley served as sports information director at Clemson from 1955-1989 and continued as a media relations representative for the Tigers until his death. He worked 502 straight Clemson football games (home & away) until having that streak ended on October 21, 2000, nine days before he passed away. He also worked 313 consecutive ACC Tournament games during his career. The Memorial Stadium pressbox at Clemson is named in his honor and he is a member of the Clemson and state of South Carolina athletic halls of fame. Throughout his three-year battle with bone cancer, which included more than 100 radiation treatments, he remained a fixture at Clemson events, representing the Tigers in his own unique style. His service to the ACC and the media who covered the conference during his lifetime will forever be appreciated.