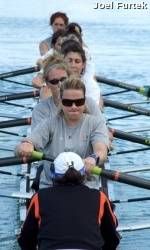 Coral Gables, Fla. – The University of Miami rowing team hosts their first scrimmage of the spring campaign Sunday welcoming Syracuse University in a series of races on Indian Creek in Miami Beach, Fla. The action begins at 9 a.m., and admission is free.

Miami comes into Sunday’s affair having taken part in their first scrimmage of the spring against Michigan last weekend in Tampa, Fla. Though the races didn’t go as planned, Miami head coach Robbie Tenenbaum–now in his second year at the helm in Coral Gables, thinks the Hurricanes are much-improved from a week ago.

“We are excited about our first home event of 2009,” stated Tenenbaum. “Our scrimmage will consist of four-to-six controlled stroke rating pieces that will be four minutes in length. The Orange come to Florida every spring to train, and this is a fantastic opportunity for our program to test ourselves against a very strong and well-coached team this early in the season.”

Sunday’s match will consist of two separate events–two Varsity 8’s from both teams, as well as a novice group from each squad. However, he is extremely proud of the off-season workouts his team has put together, and he’s confident good things are on the horizon for this season.

“I am proud of how hard our team has been training, and how much attention to detail we have out in this past week,” praised Tenenbaum. “All of our boats have made some major improvements, and we are really looking forward to our pieces with the Orange on Sunday morning.”

Tenenbaum went on to state that his team is very young, and this group of student-athletes serves as the first true recruiting class for the second-year head coach. His first Varsity Eight is comprised of mainly freshmen and sophomores, including six underclassmen altogether in the boat.

“The scrimmage starts off a busy week for us,” expressed Tenenbaum. “We are fortunate that so many teams come down to Miami Beach to train during the month of March. This gives us valuable racing experience during the early part of our schedule.”

The Hurricanes start the competitive portion of their schedule next Wednesday, Mar. 11 at home on the Indian Creek against Dowling College. That race will serve as their first full 2,000-meter race, before turning around to face Connecticut the following day.