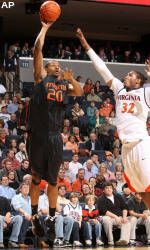 CHARLOTTESVILLE, Va. (AP) — Jack McClinton scored just 11 points, well below his average, but hit a huge 3-pointer with 47 seconds to play on Thursday night to give Miami a two-possession cushion and the Hurricanes held on to beat Virginia 62-55.

The Hurricanes (17-10, 6-8 Atlantic Coast Conference) won their second-straight ACC contest and got some clutch shooting from McClinton when it mattered most down the stretch. His third 3-pointer gave Miami a 60-55 lead and he added two free throws with 19 seconds left.

Virginia (9-15, 3-10) had won two straight at home, but failed to score after Jeff Jones’ 3-pointer produced the eighth tie of the half at 55 with 3:51 remaining. The Cavaliers committed turnovers on three consecutive possessions after pulling even, causing them to fall behind.