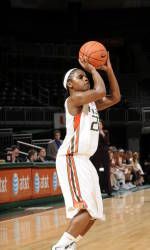 TALLAHASSEE, Fla. – The No. 11/12 ranked Florida State Seminoles (23-5, 11-1) took their first lead since the game’s opening minutes with just eight seconds remaining to pull out the 59-58 victory, over the determined University of Miami women’s basketball team (13-14, 2-10) at the Donald L. Tucker Civic Center.

With the game tied at 57, Florida State’s Alysha Harvin drew a Hurricane foul and she hit both free throws, putting the ACC leading Seminoles ahead for the first time since the score was 9-8 half way through the first half.

After a Miami timeout, freshman Shenise Johnson took a pass from Lamese James near mid-court and was tripped on her way to the basket.  The conference’s best freshman, hit the first free throw of the one-and-one, but her second attempt rattled out.  Sophomore Briyana Blair tipped the loose ball to Johnson, who was unable to convert on a jumper in the lane before the final buzzer.

“Something has changed at Miami,” said Hurricane head coach Katie Meier.  “We showed toughness and resilience and proved that we will not break.  We could have folded at Virginia, but we proved today that we didn’t.”

The first half went exactly the way Miami wanted it to.  With a frenzied but smart defensive game-plan, the Hurricanes forced turnovers and converted in transition.  With the help of a 25-8 run over a seven-minute span, Miami opened up a 16-point lead.  Led by senior LaToya Cunningham’s 13 first-half points, the ‘Canes headed to the locker room with a 33-19 lead.

The 19-points allowed in the half was the fourth time on the season that Miami had held an opponent to under 20 points in the opening half and the Seminole 16.1 shooting percentage was the lowest of the season for the ‘Canes.

Florida State opened up the second-half shooting the ball at a much higher clip, including two straight three-pointers from Tanae Davis-Cain in the period’s first minute-and-a-half.

The home team got back into the game behind both Davis-Cain and Jacinta Monroe, who were the only FSU players to score in double-figures, with 15 and 16 points respectively.

For the second-consecutive game, Miami reached the line far less than its opponent.  Against Virginia there were awarded only 18 attempts to the Cavaliers 44, and in this game, the ‘Noles hit 23 of their 33 attempts, while Miami was just 11 of 17.

Johnson scored eight points, but led all players with 10 rebounds and dished out five assists.

Miami’s schedule doesn’t get any easier.  It will travel to take on the 10th-ranked North Carolina Tar Heels on Thursday, Feb. 28 in Chapel Hill, before returning to the BankUnited Center next Sunday to face the No. 9/7 Maryland Terrapins.

Meier added, “We are playing good ball right now, we will not quit.”