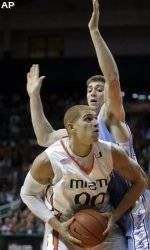 He got well against Miami.

North Carolina ‘s point guard scored 17 of his 21 points in the second half, including the game-sealing 3-pointer with 10.6 seconds left, and the third-ranked Tar Heels held off a strong Hurricanes’ comeback bid on the way to a 69-65 win Sunday night.

“We didn’t know how much he was going to go today,” said Wayne Ellington who scored 15 for North Carolina. “He came in and made some big-time shots.”

So did Miami’s Jack McClinton, who led all scorers and likely dazzled the 15 NBA scouts in attendance with 35 points, the most the Tar Heels (23-2, 9-2 Atlantic Coast Conference) have yielded to an ACC player this season. It was his third straight game scoring at least 30, making him the first Miami player with such a streak since Eric Brown 21 seasons ago.

The knock on Lawson has been that he’s not a good outside shooter. He disagrees. And after seeing him Sunday, so would the ‘Canes.

“I think I’m a great shooter. That’s one of my strengths,” Lawson said. “If somebody says [otherwise], that’s crazy.”

Miami trailed 54-40 with 12:01 left, only to get within one on three separate occasions in the final 5 minutes. But each time Miami was a point away, Lawson nailed a 3-pointer, part of his 5-for-7 effort beyond the arc in the second half.

All-American Tyler Hansbrough was held to eight points and four rebounds for the Tar Heels, but took a key charge on Brian Asbury with 44.3 seconds left to protect what was a one-point lead.

The win, combined with Duke and Clemson losses earlier Sunday, left the Heels — who started 0-2 in the conference — two games up in the loss column in the ACC.

“Better than being two games behind like it was when we started,” North Carolina coach Roy Williams said.

Asbury scored 12 for Miami (15-9, 4-7), which has lost six of its last eight, its last two to Duke and the Tar Heels by a combined seven points.

Miami was without starting forward Dwayne Collins, who sprained his left ankle in practice Saturday. So without their second-leading scorer and top rebounder, the Hurricanes put even more of a burden on McClinton.

He came through — almost enough to shoot down the Heels.

“I’d rather score two and have us win,” McClinton said.

After Ellington hit a 3-pointer to give North Carolina that 14-point lead, McClinton scored eight points from the perimeter in 64 seconds, including a pair of 3s to get Miami within six with 9:14 remaining.

But whenever North Carolina needed something, Lawson came through in what turned into a 3-point contest.

He connected from beyond the arc, only to have Adrian Thomas answer with 3:19 left to get Miami within one. So Lawson hit — what else? — another 3-pointer, thumping his arm across his chest for good measure.

McClinton answered, naturally, with an arm-thumping 3 of his own, but that was the Hurricanes’ last hurrah. Hansbrough took the charge on Asbury in the final minute, Lawson sealed it with yet another 3, and the Heels held on.

North Carolina opened 9-for-27 from the field. Miami scored the game’s first seven points, and McClinton set the tone by carrying the Hurricanes for much of the opening half.

Eventually, the rest of the Hurricanes got going. It just wasn’t enough to beat UNC and continued a tough trend for Miami, which is 0-5 in games decided by five or fewer points since Jan. 25. Miami’s only win since that date was a 79-52 romp over Wake Forest on Feb. 4.

“It is tough,” Haith said. “Our guys have got to understand, we’re so close. We’re in every game right to the end.”

Hansbrough didn’t have a single point or rebound until 8:35 remained in the half, scoring on a drive to give North Carolina a four-point lead. Hansbrough added a jumper about a minute later to push the Tar Heels’ edge to 22-16.

He never really got on track, but thanks to Lawson, it didn’t matter.

“We’re lucky,” said Williams, whose team was held nearly 24 points below its season average. “That’s the bottom line. We were lucky.”