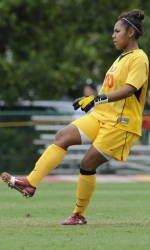 CORAL GABLES – University of Miami freshman goalkeeper Vikki Alonzo was named by Soccer Buzz to the Third-Team Freshman All-American squad. Sophomore Brittney Macdonald was also named to the All-Southeast Third-Team. Both players were elected to their respective teams by a panel of Division I coaches and the Soccer Buzz Staff.

Alonzo, a Carrollton, Texas native also was named to the Southeast All-Freshman Team. On the season, the heralded goalkeeper played every minute for the Hurricanes and recorded a school-record 11 shutouts, shattering the previous record of six. She was one of four keepers to make one of the top-three freshman teams.

“I am very happy Vikki was recognized,” said head women’s soccer coach, Tricia Taliaferro. “I believe she is one of the best goalkeepers in the country. She has a very professional mentality and tremendous upside. We look forward to coaching her over the next three years.”

The Sept. 9 ACC Player of the Week Honoree, ranks first in school history in single season saves (114), shutouts (11), goals against average (0.88) and minutes in goal (2,055). Alonzo follows teammates Brittney Steinbruch and Lauren Singer in receiving freshman honors. Steinbruch earned a first-team nod while Singer was a third selection a season ago.

Macdonald, a native of Littleton, Colo. was named to the Soccer Buzz Elite Team of the Week in week 10 of the regular season. The second-team all-district academic honoree was an integral part of the Hurricane defense that aided Alonzo in her record-setting year.