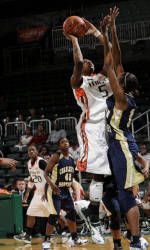 CORAL GABLES – The University of Miami women’s basketball team improved to 11-8, 1-4 with a 72-60 win over the NC State Wolfpack (8-11, 0-4). The BankUnited Center was the site of the Hurricanes first Atlantic Coast Conference victory of the season and the first ever win over NC State.

Freshman Shenise Johnson was started the game 4-4 from the field on way to her fourth double-double of the season. The two-time ACC Rookie of the Week scored 11 points and grabbed a career-high 13 rebounds.

Johnson wasn’t the only one crashing the boards, senior Latoya Drake pulled down a career-high 11 rebounds of her own. The Baxley, Ga. native fell just shy of recording her first-career double-double as she scored nine points on the night.

For the fifth time this season and the fourth time in her last six games, freshman Riquna Williams led the Hurricanes in scoring. For the night the Pahokee, Fla. product scored 18 points in her fourth career start.

Entering the night, Miami was shooting a league worst 60.3 percent from the foul line. However, against NC State the `Canes went off from the charity stripe, hitting a season-high 26 shots on 29 attempts. Williams went 9-10 from the line and also hit one of the two Miami three-pointers, Johnson hit the other.

Charmaine Clark, who in her first two seasons combined, totaled 58 assists. Coming into this game, the junior had 58 assists this season alone. On the night, Clark tied for the game-high with four assists and also tied a season-high with 13 points. Junior Diane Barnes played a very hard and productive 13 minutes as she scored eight points and grabbed six rebounds.

The Hurricanes could only force 12 Wolfpack turnovers but they also played one their most efficient games of the season, turning the ball over a paltry nine times.NC State’s Bonae Holston led her team with a double-double of her own, scoring a game-high 23 points to go with her 12 rebounds. Nikitta Gartrell scored 12 points of her own, while Lucy Ellison came down with 10 rebounds.

Miami entered the evening with an 0-8 all-time record against NC State dating back to the 1981 season.

The Hurricanes will head on the road for their next contest when they face Georgia Tech at the Alexander Memorial Coliseum, Thursday, Jan. 29 at 7 p.m. Miami returns to the BankUnited Center on Sunday, Feb. 1 as they face Wake Forest at 2 p.m. For ticket information, please call 1-800-Go-Canes or visit hurricanesports.com.

During halftime of that game, two lucky fans will win a super prize pack including a 42″ plasma television, mounting hardware and free installation by a member of the Geek Squad.

All students and fans in attendance will be encouraged to fill out an entry form as they enter the BankUnited Center and must be present to win. The two winners will each receive their television at halftime, just in time for the Big Game.