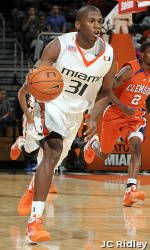 Tyler Hansbrough added 24 points for the Tar Heels (16-2, 2-2 Atlantic Coast Conference), who used a 13-0 run to end the first half and push ahead for good. But it was Ellington, who had struggled with his shot much of the season, who got North Carolina rolling with a dazzling shooting display that opened up a close game.

After a scoreless first half, Ellington hit eight straight shots with a career-high seven of those coming from behind the arc. Once the junior got hot, North Carolina pushed the lead to 20 points on the way to evening its league record.

Jack McClinton had 21 points for the Hurricanes (13-4, 2-2), who led by nine in the first half and trailed by just four with 17 minutes left before Ellington’s outburst.

Ellington’s third 3 gave North Carolina a 50-43 lead and started the decisive 21-5 run. But Ellington kept going, burying two more 3s before rattling one home with 9:22 to play. His seven 3s were the most by a Tar Heel since Rashad McCants hit eight against Clemson in 2004.

Hansbrough had 20 first-half points — the reigning national player of the year’s 11th 20-point game in 14 outings.

Behind McClinton’s fast start, Miami led 32-23 on James Dews’ stepback jumper with 6:45 to play. But that’s when the Tar Heels began to show some of the desperate intensity that has been lacking recently, starting when Ty Lawson hounded McClinton near midcourt until knocking the ball loose, diving for it in the backcourt and passing it to Hansbrough for a breakaway dunk.

That was the first big play in North Carolina’s 13-0 run to close the half, which included a 3-pointer from Danny Green just before the horn that gave the Tar Heels a 36-32 lead.

Miami missed its final nine shots of the half.