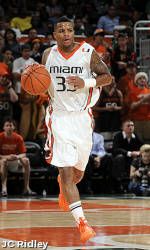 Collins scored 18 points in the second half, including 12 straight during a stretch that ended with a short jumper, to give Miami (11-3) a 75-60 lead with 4:37 left. He hit a career-high 12 free throws on 16 attempts — which ties for the fifth-most attempts in program history — to lead the Hurricanes to their fourth-straight double-digit win.

Jack McClinton finished with 20 points — including four three-pointers, and moved past Mike Wittman for 14th place on Miami’s career scoring list with 1,327 points. It was his sixth 20-point game of the season for the ACC’s all-time three-point field goal percentage leader, including a perfect 6-of-6 performance from the charity stripe.

Carderro Nwoji led Florida Atlantic (4-11) with 20 points but fouled out with 8:10 remaining in the game.

McClinton’s 3-pointer gave Miami a 50-38 lead with 15:04 remaining, but Florida Atlantic ran off eight unanswered points and Paul Graham’s two free throws with 13:02 left reduced Miami’s lead to 50-46. The Hurricanes responded with a 13-2 run over the next 5:13 to extend their advantage to 15 points and they would lead by double figures throughout the remainder of the game.

Miami — who is ranked third in the nation in rebounding margin — controlled the boards with the 47-29 advantage for the fourth-straight game the Hurricanes have owned the 10-plus rebounding advantage.

Miami closes its 2008-09 non-conference slate with an 11-2 record with a 4-1 mark away from home — including wins at Kentucky at St. John’s. With tonight’s win over FAU, the Hurricanes improve to 5-0 versus in-state opponents this season.

Miami returns to ACC play on Saturday at No. 17/24 Boston College. The game will be broadcast live on ESPNU beginning at 7 p.m.