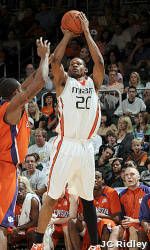 McGowan added 10 rebounds for his second double-double of the season, while redshirt freshman Julian Gamble posted the first of his career with a career-high 13 points and 13 rebounds. It was the first time a pair of Hurricanes registered a double-double since Anthony King and Dwayne Collins managed the feat in a win over FIU on Nov. 11, 2006.

Miami (9-3) expanded on a 38-20 halftime lead and limited the Ospreys to four field goals in the second half. The margin of victory was Miami’s largest of the season, surpassing a 96-60 win over Florida Southern on Nov. 15.

The Hurricanes never trailed and kept the Ospreys (2-10) scoreless for the first 6:05 of the game. Miami took the early 9-3 lead and then extended it to 21-8 as McGowan hit two field goals in a 12-5 spurt.

Miami dominated the boards, out-rebounding North Florida 53-17. The Ospreys’ season-low 17 rebounds were the fewest by a Miami opponent since Coppin State finished with 12 in a 64-54 UM win on Jan. 20, 1988.