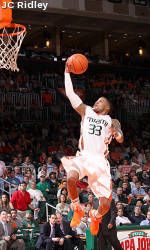 Despite not starting for the first time this season, McClinton overtook John Salmons for 17th place on Miami’s all-time scoring list with 1,292 career points.

Miami (9-3) expanded on a 38-20 halftime lead and limited the Ospreys to four field goals in the second half. The margin of victory was Miami’s largest of the season, surpassing a 96-60 win over Florida Southern on Nov. 15.

The Hurricanes never trailed and kept the Ospreys (2-10) scoreless for the first 6:05 of the game. Miami also struggled with early shooting problems, making 2 of 13 field goal attempts during the first 8:02 to lead 9-3. The Hurricanes built a 21-8 lead as McGowan hit two field goals in a 12-5 spurt.