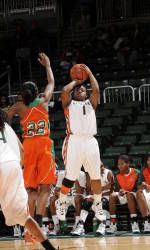 CORAL GABLES – The University of Miami women’s basketball team (9-3) opened the UM Holiday Tournament with an impressive 81-41 victory over the Brown University Bears (1-9), Monday night at the BankUnited Center.

Four Hurricanes scored in double-figures in the 40-point win over the Bears. Senior LaToya Cunningham had 14, as she hit four three-point field-goals. It was the fourth time this season that Cunningham has made four or more three-pointers in a game and she currently ranks third in the ACC with 2.4 treys per contest.

Riquna Williams, Shenise Johnson and Charmaine Clark each scored 13 points on the night and each contributed more than just scoring in the dominating win. Johnson had eight rebounds and Clark had a team-high four assists.

However, Williams had the best game of all. To go with her career-high 13 points, the freshman guard grabbed three rebounds and had an amazing five blocks to go with her five steals. Four of her five highlight-reel blocks came in the second half and led to many of the `Canes 12 fast-break points.

Miami dominated all the major statistical categories, with the exception of rebounds. Brown grabbed 47 boards compared to 46 for UM. However, the Hurricanes scored 27 second-chance points to only eight for the Bears.

Freshmen Sylvia Bullock led the `Canes with a career-high nine rebounds and was all over the court showing her defensive intensity.

For the second straight game, Miami forced its opponent to turn the ball over 31 times, scoring 41 points off of those turnovers.

Brown’s Christina Johnson had a team-high 10 points and Natalie Bonds had a game-high 14 rebounds in leading the visitors.

Miami opened the game with a 15-0 run and for the third time this season, held its opponent to under 20 points in the first half, leading at the break 40-18. The Hurricanes faced Brown exactly nine years ago in the only previous meeting between the two teams, in a game that Miami won, 79-62, in the first-ever UM Holiday Tournament.

The `Canes ninth victory of the year matches their win-total from a season ago.

Tomorrow, Miami will face the No. 9/10 Auburn Tigers in the championship of the UM Holiday Tournament. In today’s opening game, Auburn fought off a pesky Duquesne team, 87-67.

Brown will be the designated home team in the consolation game set to start at 5 p.m., with the Miami/Auburn contest getting underway 20 minutes after the completion of the first game. For ticket information, please call 1-800-Go-Canes or visit hurricanesports.com.