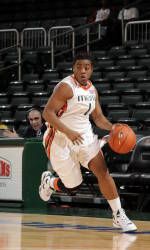 CORAL GABLES – The University of Miami women’s basketball (5-3) team couldn’t hold on to their half-time lead as they fell to the Indiana Hoosiers (5-2) by a 69-54 score, Friday night at the BankUnited Center, in the second annual ACC/Big Ten Challenge.

Miami led by as much as 11 points in the opening-half and led at the break by four at 32-28. However, the needed energy just wasn’t there for the Hurricanes as they shot only 20 percent in the second period.

Even on a night where she had her worst shooting performance of her young collegiate career, freshman Shenise Johnson still nearly recorded a triple-double. Johnson leads the team with three double-doubles on the season, she scored nine points to go with nine rebounds and a season-high eight assists.

A pair of Hurricanes scored in double-figures, as junior Diane Barnes dropped in 10 points to go with her six rebounds and freshman Riquna Williams had a team-high 11, including three three-pointers.

Amber Jackson led Indiana with 17 points and 12 rebounds. Kim Roberson added 15 and Jamie Braun had 10 points for the visitors. For the night, The Hoosiers grabbed 19 offensive rebounds, forcing Miami to play defense for extended periods, ultimately wearing down the `Canes.

Miami falls to 0-2 in the ACC/Big Ten Challenge, as they fell to Michigan in the inaugural contest a season ago. The ACC has won the challenge both years, this year going 7-4 in the 11-game competition.

Miami will have eight days between games, as the players prepare for final exams. The Binghamton Bearcats will visit the BankUnited Center Saturday, Dec. 13. Tip-off is scheduled for 1 p.m., for ticket information, please call 1-800-Go-Canes or visit hurricanesports.com