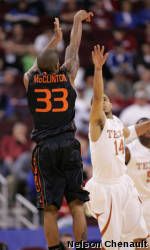 Hurricanes Fall to Huskies at the Paradise Jam Tournament

“It’s not about me hitting the first shot or the last shot,” Thabeet said. “I give credit to my teammates and my coaches for executing the plays.”

Jack McClinton had 27 points for the Hurricanes, and Dwayne Collins added 16 points and 14 rebounds. McClinton was 5-for-8 from 3-point range.