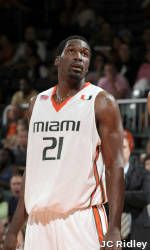 CHARLOTTE AMALIE, U.S. Virgin Islands (AP) – No. 17 Miami got a spark from an unexpected source at the Paradise Jam on Friday.

Senior guard , who missed the Hurricanes’ season opener with a high ankle sprain, returned to the lineup to give them 13 points on 5-for-6 shooting in a 70-60 win over Southern Mississippi.

“It’s great to be back with my teammates. … ” Hurdle said. “The adrenaline was flowing. I felt like a kid on Christmas.”

Hurdle’s 22 minutes of play included a clutch 3-pointer at the first-half buzzer to give the Hurricanes a 36-24 lead at the University of the Virgin Islands.

Grinning widely, Hurdle jogged backward as the buzzer blared and his jubilant teammates crowded around him on the way to the locker room.

“Lance Hurdle — his play was crucial,” said Miami coach Frank Haith, adding that his team did a good job keeping the Golden Eagles out of the paint.

The Golden Eagles outrebounded the Hurricanes 35-33, but Miami shot 44.7 percent from the floor while holding Southern Miss to 39 percent in a game that had three lead changes and two ties.

Senior guard had 13 points for Miami, but Haith said he was “pressing” too much.

Miami, which entered the season with its highest preseason ranking, took a 15 point-lead with 4:37 remaining and never looked back.

Golden Eagles coach Larry Eustachy did not speak to reporters after the game. Assistant Steve Barnes said the coaches were “disappointed in our lack of execution and our defensive breakdowns.”

Miami, which has its best ranking since they were No. 17 on Feb. 18, 2002, will next play the winner of Friday night’s game between No. 2 Connecticut and La Salle. Southern Miss will take on the loser. The Hurricanes’ game will tip at 6 p.m. (EST) on Sunday and will be broadcast on Fox College Sports.