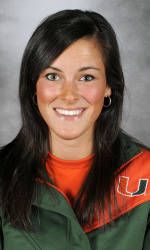 Coach Tenenbaum, entering into his second year at the helm of the UM rowing team, was eager to announce the captains on Wednesday night, but held off until after the team meeting on Thursday morning following practice at the Shane Watersports Center in North Miami Beach.

“I am very pleased to announce our team captains for the 2009 spring racing season,” expressed Tenenbaum following the meeting. “Laura [Cordner] and Nic [Saner] are both in their final year of eligibility here at Miami, and have the urgency of getting to the top of the medal podium this year! Christina Crocco is a sophomore that has really gained the confidence of our team and the coaching staff. I am confident that they will be great leaders and role models for all of our rowing student-athletes here at the U.”

Cordner rowed in Varsity Eight last year for the `Canes on her way to being tabbed as an All-ACC Academic Team member. She also picked up Collegiate Rowing Coaches Association (CRCA) 2008 Division I Pocock All-American Second Team honors following a very successful season for UM. That was concluded with her final honor of being named to the Collegiate Rowing Coaches Association (CRCA) All-South Region First Team.

Nic Saner saw most of her time in the Second Varsity Eight boat. She came to UM prior to the start of the 2007-08 campaign from the University of Cape Town in her home country of South Africa.

As for Crocco, the sophomore coxswain served as coxswain of the 2V8 boat in 2007-08. Currently, she is double majoring in Elementary Education and English.

“Our team goals here at Miami are to win conference, regional and National Championships, and to do this, we need leaders with `fire in their bellies’ and that is what I see in Christina, Laura and Nic,” expressed Tenenbaum. “I am proud to announce them as leaders of our team.”

The UM rowing team is taking some much-needed time off before setting back to the waters for what is expected to be a challenging spring season. They kick things off on Feb. 22 with a scrimmage against Michigan in Tampa, followed by the season-opener against Connecticut at home on Mar. 12. For more information on the rowing team, please log on to www.hurricanesports.com.