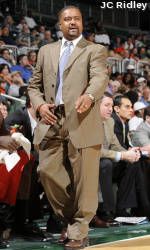 Adams, ranked among the top 20 shooting guards by both ESPN and Scout.com, averaged 18.2 points and 7.8 rebounds per game as a junior at Middle Creek High School en route to NCHSAA 4A All-State honors. The four-star recruit, ranked among the top 50 players in the 2009 class by the Bob Gibbons Reporting Poll, averaged 20.1 points per game with his AAU team – Garner Road – and was named to the all-tournament team at the Bob Gibbons Tournament of Champions in May.

“Garrius is a great shooter and scorer and will be a strong wing presence for us,” said Coach Haith, who is in his fifth year with the Hurricanes. “After this season we will be losing some of our perimeter players, and I expect Garrius to come in and make an immediate impact.”

Kirk, ranked among the top 30 power forwards by ESPN and Scout.com, will help the Hurricanes in the post. Known for his hook shot, as a junior he averaged 10.5 points, 6.5 rebounds and 2.0 blocks per game for Detroit Country Day, who is ranked No. 1 among Greater Detroit area schools by ESPN RISE heading into the 2008-09 season. A four-star recruit, Kirk is ranked No. 55 among all players in the 2009 class by Scout.com.

The 6-8, 213-pound forward plays AAU basketball for The Family and was also recruited by Michigan State, Southern California and USF.

“Donnavan will give us athleticism in the front line,” said Coach Haith. “He’s a hard worker with a good skill set. It was a tremendous accomplishment for us to be able to go into Michigan and recruit him to play basketball for the University of Miami.

“Both Garrius and Donnavan are wonderful young men and will be a great fit for our program.”