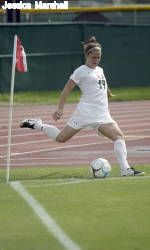 14th-Ranked Cavaliers Too Much For No. 25 Miami

CORAL GABLES – The University of Miami women’s soccer team (7-3-2) couldn’t come back from a two-goal deficit in their first Atlantic Coast Conference loss to The Virginia Cavaliers (8-1-1), 2-0 Sunday afternoon at Cobb Stadium.

Virginia scored their first goal just 10 minutes into the game. A long centering pass from Lauren Alwine was collected by Meghan Lenczyk , who fired a strike over the outstretched arms of Vikki Alonzo from 22 yards out.

The Hurricanes goal, coming into the game, was to contain the possession oriented Cavalier offense. Except for the Lenczyk goal and another by Alli Fries in the 35th minute, Miami, followed that game plan.

The second half saw an improved squad, but they couldn’t overcome the earlier mistakes.

“Our game plan was to stay compact, I thought we did a good job with it, but a lack of concentration on a couple set pieces, led to the goals,” said associate head coach Jeff Freeman.

Virginia’s defense did well against the Hurricane offense, allowing only four shots with three on goal, at the visitors fired off 21 of their own. Miami keeper Vikki Alonzo made 8 saves on the day.

After going 1-1 in the ACC opening home stand, Miami will travel to Boston College on Thursday, Oct. 2 then to Maryland on Sunday, Oct. 5.

The Hurricanes return to Cobb Stadium on Sunday, Oct. 12 when they face 2007 NCAA finalist Florida State at 12 p.m.