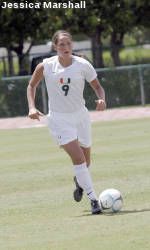 CORAL GABLES – The No. 19 University of Miami women’s soccer team (7-1-0) lost their first match of the season to the defending Mountain West champions, BYU (5-4-0), by a 1-0 score, Tuesday night at Cobb Stadium.

The Hurricanes and Cougars played a scoreless first half with the visitors holding a slight 7-6 edge in shots taken.

However, in the 69th minute, BYU took advantage of a Hurricane turnover near midfield. Lauren Anderson passed on to Becca Riddle who crossed the ball through the box. Miami keeper Vikki Alonzo dove to intercept the pass, but it glanced off her fingertips and found the foot of Auna Janis, who scored in the open net.

Miami continued to put pressure on the BYU keeper, especially in the final minutes, when a Brittney Steinbruch cross rolled just inches away from the goal line, out of the reach of both the goalkeeper and the other Hurricane attackers.

The BYU goal held as the game winner, despite the fact the Hurricanes outshot the Cougars in the second half, 9-4.

“I’m obviously disappointed with the result, but we played very, very good soccer and had chances to win the game,” said head coach Tricia Taliaferro. “This was a good learning experience, none us like to lose, but we will remember this when we get into a tough situation, when the game is tight.”

Miami heads to California for their longest road trip of the season, when they face second-ranked UCLA Friday evening at 8 p.m. EST and No. 25 San Diego, Sunday afternoon at 2 p.m., at the UCLA Women’s Cup.

“You come to Miami to play the top teams in the country… I’m looking forward to this trip,” added Taliaferro.

Junior Danielle Griebel announced, “We are definitely ready for this trip, especially coming off this loss. We know what it feels like and we don’t want it to happen again.”

When the Hurricanes return to Cobb Stadium on Sept. 25, they will face Virginia Tech in their ACC opener.