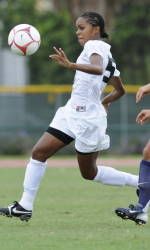 CORAL GABLES – The University of Miami women’s soccer team is coming off an impressive 2-0 win on Wednesday night over Purdue and now turn their attention to Eastern Michigan. The Eagles will come into Cobb Stadium and witness a sea of orange, as the Hurricanes have announced the team will don orange uniforms instead of the traditional white.

Sophomore Brittney Streinbruch leads an impressive Miami squad with eight goals on the season. Another large part to Miami’s 6-0 start has been the play of the UM defense, especially freshman goalkeeper Vikki Alonzo. The newcomer has only allowed one goal on the season and has recorded five shutouts.

Eastern Michigan comes into the match with a record of 2-1-2 and are fresh off a 4-0 victory at Eastern Illinois. They are led offensively by Chelsea Detrick, who has three goals on the season.

Miami’s next home match will be Tuesday, Sept. 16 against BYU, that game is also set to start at 7 p.m.