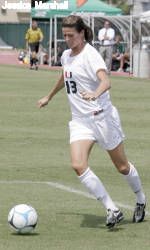 Steinbruch’s seventh and eighth goals of the season was the only offense the Hurricanes needed in win. The two goals give the 2007 ACC Freshman of the year 24 for her career, second-most in Miami history behind Britney Butcher (2001-04).

The sophomore’s first goal came in the 22nd minute, when Steinbruch breezed through multiple Purdue defenders and fired a left-footed shot from the left edge of the box, inside the far post.

Her second goal came in the second half at the 58:23 mark. The Wyckoff, N.J. native out-fought a Boilermaker defender for a ball in the box and blasted a shot inside the near post, chasing the opponent’s keeper from the game.

Steinbruch said, “All season our goals have been a product of our defense, tonight wasn’t any different.” She added, “Goals will come when the defense plays well.”

Once again, the Hurricane defense stepped up when needed, in helping Alonzo pick up another shutout.. Alonzo, the reigning ACC Player of the Week, made four critical saves in the game and has earned the full trust of her new teammates.

“Vikki has filled some big shoes (Lauren McAdam, 2004-07) as a freshman,” said head coach Tricia Taliaferro. “She, like all of our freshman have exceeded expectations so far this season… they are critical to our success.”

In the six record-breaking wins, Alonzo has only allowed one goal and recorded five shutouts.

“It’s an honor to be in goal for the team that set the record,” said Alonzo. “The defense was great once again, especially at the end of the match.”

Miami will look to extend their win streak to seven games when they host Eastern Michigan at Cobb Stadium on Friday, Sept. 12th at 7 p.m. Tickets are on sale at $3 for children and $5 for adults.