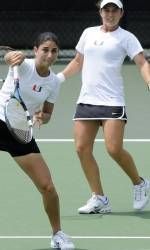 No. 12 Miami Cruises Past Quinnipiac In NCAA First Round, 4-0

Miami (16-5) got out to an early lead over Quinnipiac (9-11) in all three doubles matches before the match was suspended due to inclement weather. After a delay of just over six hours, play resumed at approximately 5:45 p.m. with UM clinching  the doubles point shortly thereafter.

The 20th-ranked team of Vallverdu and Romy Farah beat Quinnipiac’s Mary Wilson and Adrienne Markison, 8-1, in the No. 1 spot for the early advantage before Eichkorn and Caren Seenauth won 8-0 at No. 2 against Jackie Herb and Amanda Petruzzi to put UM up 1-0.

Miami continued its strong play when single play began, winning all six first sets, 6-0. Vallverdu was the first to eventually complete her match, knocking off Wilson at No. 1 to put UM up two. Wasilewski would follow immediately after with another dominant win of her own, taking out Nikki Adams in the sixth position before Eichkorn sealed UM’s eighth win in its last nine matches with a convincing win over Petruzzi at No. 4.

The first round win marked the seventh straight season UM has moved on into the second round of the NCAA Team Championships.

With her win, Eichkorn extends her singles winning streak to nine straight matches, with her last loss coming on March 9. Vallverdu and Farah also extended their winning streak at No. 1 doubles to four straight with their 8-1 victory.

Miami will now take on the winner of Friday night’s match between No. 2-seed Notre Dame and No. 3-seed FIU in the regional final Saturday morning at 11 a.m.