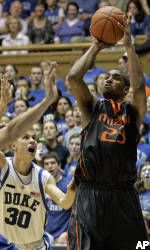 CORAL GABLES, FLA. – The <?xml:namespace prefix=”st1″ ns=”urn:schemas-microsoft-com:office:smarttags”?>University of Miami men’s basketball team will play host to OhioState in the 2008 ACC/Big Ten Challenge on Tues., Dec. 2, at the BankUnitedCenter. Time and ESPN network coverage is to be determined.<?xml:namespace prefix=”o” ns=”urn:schemas-microsoft-com:office:office”?>

It marks the third time that Miami will be participating in the Challenge, after appearances in 2005 and 2006, while it will be the seventh-straight appearance by OhioState. The Hurricanes lead the all-time series versus the Buckeyes, 2-1, and have won two straight – including a 75-62 victory in the second round of the 2000 NCAA Tournament.

“It’s exciting to be a part of this event,” said Miami head coach Frank Haith, who just wrapped up his winningest season at the helm. “The teams in these two conferences play at such a high level, which makes for fun – yet intense – match ups. We look forward to the challenge and will work to represent both the University of Miami and the Atlantic Coast Conference well.”

The Hurricanes come off one of the most successful seasons in program history, finishing 23-11 and among the top-five in the ACC. They will return four starters and their top-five scorers from their 2007-08 squad that advanced to the second round of the NCAA Tournament, including First Team All-ACC selection Jack McClinton, who averaged a team-high 17.7 points per game, while converting an ACC-best (third in the NCAA) 91.9 percent from the line and 42.7 percent from long range.

Ohio State finished the season 24-13 and won the postseason NIT championship with a 92-85 win over UMass on Apr. 3.

It marks the 10th year for the event, featuring the top college basketball programs playing for conference supremacy and the Commissioner’s Cup on ESPN, ESPN2 and ESPNU. The ACC has won the Commissioner’s Cup in all nine previous years. The 11 games will take place on the Monday, Tuesday and Wednesday after Thanksgiving (December 1-3), with game times and network coverage to be determined.