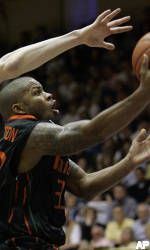 Coral Gables, FL (www.hurricanesports.com) — – Junior guard Jack McClinton, who scored 38 points to lead the Hurricanes to a first-round NCAA Tournament victory over St. Mary’s on Friday, March 21, has been chosen the Muscle Milk Student-Athlete of the Week for the period March 17-23.

In the victory over St. Mary’s, the Baltimore native scored 32 of his points in the second half as the Hurricanes overcame a 32-27 deficit at intermission to defeat the Gaels 78-64. The game marked the first NCAA appearance by the men’s basketball team since 2002.