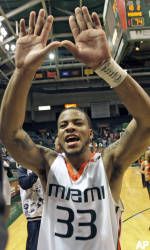 An All-ACC Third Team pick in his first season competing for the Hurricanes in 2006-07, the junior guard earned first-team honors this season after leading the league in three-point field goal percentage (.442), three-point field goals per game (3.00) and free throw percentage (.900), while ranking fifth in scoring with 17.4 points per game – including an 18.8 point average in ACC games.

“Jack is very deserving of this honor,” said fourth-year Miami head coach Frank Haith. “I am extremely happy for him and proud of what he has brought to this program. He is a tireless worker, and has put in the effort necessary to be counted among the ACC’s finest.”

“It means a lot to be named to the First Team,” said McClinton. “It shows that the long nights in gym are paying off. But more importantly, I’m proud that I can to contribute to this team and help this program succeed.”

McClinton, who was also named to the All-ACC Academic Men’s Basketball Team for the second-straight season, has scored in double figures 25 times this season – including 10 games of 20-or-more points and two games of 30-plus points. With 21 points at FloridaState on Saturday, he became just the 28th Hurricane to score 1,000 career points. He is just the fourth to do it in his first two seasons – and the first to accomplish that feat since Don Curnutt in 1969.