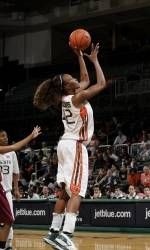 CORAL GABLES, <?xml:namespace prefix=”st1″ ns=”urn:schemas-microsoft-com:office:smarttags”?>Fla. – The University of Miami women’s basketball team (9-20, 2-12) was unable to hold on to a second-half lead against the Boston College Eagles (19-9, 7-6), falling in their final home game 63-52 at the BankUnited Center.<?xml:namespace prefix=”o” ns=”urn:schemas-microsoft-com:office:office”?>

Boston College’s LaShaunda Pratt, who didn’t play in the first half, hit all three of her three-pointers, leading the charge to erase the Hurricanes 10-point lead halfway through the second half.  In all Pratt was 4-4 from the field, as her team closed the game on a 34-13 run.

The first half belonged to the `Canes, as they outscored the Eagles 11-0 on points off turnovers.  Miami gave the ball up only four times, compared to only 14 for BostonCollege.  It looked like the Orange and Green would be heading into the break with at least a three-point lead but Ayla Brown’s desperation put-back as time expired made the halftime score 24-23, in favor of Miami.

The Hurricanes opened the second half on a 15-6 run, fueled by three LaToya Cunningham three-pointers, she ended the game with 11 points.  After Cunningham hit those shots, BostonCollege stepped up and went on their game winning run.  After all their first-half turnovers, the Eagles committed only five after the break.

Playing in her last game at the BankUnitedCenter, Carla Williams had arguably her best defensive performance, grabbing six tough rebounds and stealing a career-high six balls against the ACC’s biggest team.

Maurita Reid, also playing in her final home game, tied for the team lead with 11 points, six of those coming on two three-point baskets.  Reid also pulled down six rebounds in the game.

Unfortunately for Miami the shots weren’t going in, as they went through two separate streaks without a field goal in the second half.  The first drought lasted 3:39, in which the Hurricane lead was cut from 10 to five and the second, lasting 4:42, saw Miami’s five point lead turn into a BC nine point advantage.

Miami heads into the ACC Tournament in Greensboro, N.C. as the No.12 seed, where they will face the No. 5 Georgia Tech Yellow Jackets.  In ACC play the two teams split, with each winning on last second three-pointers at home.  Game time is set for 11 a.m. at the Greensboro Coliseum Complex.