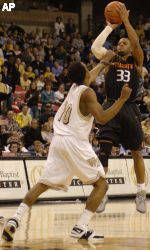 CLEMSON, S.C. (AP) -K.C. Rivers scored 19 points and Clemson rallied back to beat Miami 79-69 after squandering all of a 21-point lead Wednesday night.

The Tigers (20-7, 8-5 Atlantic Coast Conference) won 20 games for the second straight year and guaranteed themselves a nonlosing ACC record for the first time in 11 years.

When McClinton swished a 3-pointer with 6:47 remaining, Miami had its first and only lead of the game, 60-59. That’s when Clemson shook off its funk to regain control.

Cliff Hammonds basket on the Tigers next possession put them in front for good. Hammonds then followed by blocking McClinton’s driving layup. Rivers came back with two foul shots and a 3-pointer that put Clemson ahead 66-60.

Miami, which came in with a four-game win streak, could get no closer than four points the last five minutes.

The Tigers have struggled to reach .500 in the ACC in the past decade. They hadn’t bettered that mark since going 9-7 in 1996-97 under coach Rick Barnes, part of a streak of three straight NCAA tournament appearances.

But Barnes left for Texas following the 1997-98 season and Clemson hasn’t reached the NCAAs since.

Clemson moved back into third place in the ACC and gets its first shot at a winning ACC season Sunday at Maryland. The Tigers finish the season with games at Georgia Tech and at home against Virginia Tech.

McClinton finished with 18 points, all but two in the second half. Dwayne Collins had 11 points and 10 rebounds for Miami, who hoped to reach 20 wins and give itself another solid win on its NCAA resume.

Hammonds added 12 points for the Tigers.

Clemson shook off a disappointing loss and poor shooting night at Florida State in its last game more than a week ago. The Tigers had missed 24 of 27 3-pointers in their 64-55 loss to the Seminoles. This time, they made their first six from behind the arc and finished the game shooting 10-of-16 on 3s.