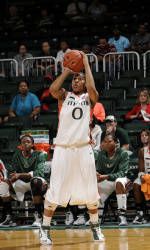 After holding NC State without a field goal for the final 7:21 of the first half and the opening 2:44 of the second half, Miami was unable to score a point for a total of 10:30 halfway through the second period.

The Hurricanes turned to a full-court pressure and forced numerous Wolfpack turnovers, closing out the first half on a 12-2 run. Miami also held NC State’s leading scorer Khadijah Whittington scoreless in the first half, holding her to 11 for a the game.

NC State led by eight with 2:06 left in the game, but a Lamese James lay-up and a Damisha Moore three-pointer cut the lead to three before the `Canes were forced to foul. Whittington hit her shots from the charity stripe, sealing the Wolfpack win.

Maurita Reid hit three three-pointer on her way to a team-leading 13 points, she also led Miami with eight rebounds. Moore scored seven points and pulled down three rebounds, adding a spark the Hurricane cause.

Shayla Fields hit all three of NC States three-pointers on her way to a game-high 16 points. Whittington (11) and Nikitta Gartell (10) also scored in double-figures.

Miami will return to the BankUnited Center next Thursday as they play host to the no. 4 North Carolina Tar Heels.