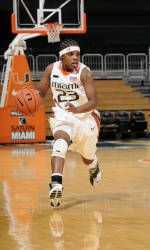 Miami snapped their five-game losing streak their last time out, in a thrilling 54-52 victory over the Georgia Tech Yellow Jackets.  Freshman Epiphany Woodson hit the game winning three-point basket with 1.3 seconds remaining to give the Hurricanes their second ACC win of the season.

A Look at Virginia Tech

VirginiaTech has struggled thus far through the ACC conference schedule going winless in nine games.  In their last ACC game they faced another team that had been winless in conference, in WakeForest.  The Demon Deacons came out on top with a 17-point victory, 67-50.

Brittany Cook leads all Virginia Tech scorers with 17.7 points per game, but Andrea Barbour is close behind her with 15.8.

Miami holds an all-time 5-4 record against the Hokies, but the series is fairly new, with Jan. 7 2001 being the first meeting.  The two teams have alternated wins the last three matchups with Virginia Tech winning the last meeting 78-71 in Blacksburg last February.