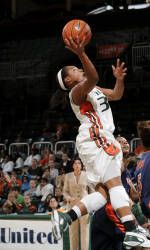 CORAL GABLES – The <?xml:namespace prefix=”st1″ ns=”urn:schemas-microsoft-com:office:smarttags”?>University of Miami women’s basketball team (9-14, 2-6) served a cold dish of revenge to the Georgia Tech Yellow Jackets (18-5, 5-4) in a 54-52 victory at the BankUnitedCenter, Thursday evening.<?xml:namespace prefix=”o” ns=”urn:schemas-microsoft-com:office:office”?>

This time, Miami had a freshman rise to the occasion, with her team down 51-52, Epiphany Woodson came off a high screen and shot a three from the top of the key.  Her shot proved to be true, hitting nothing but net with just over one second to go in the game.  Georgia Tech was forced to throw a full court pass that was never cleanly caught and Miami earned its first victory since Jan. 10 at Clemson.

Woodson connected on four three-pointers on her way to a career-high 16 points.  Charmaine Clark tied a season-high with 12 points.

For only the fifth time all year Maurita Reid did not lead her team in scoring, but the senior played a vital role in the win, as she dished out four assists, grabbed six rebounds and picked up four steals to go along with her five points.

Junior Lamese James returned to her early season form as she battled hard in the paint collecting a game-high eight rebounds and scoring eight points.

More impressive than the strong play of individuals on offense was the collective team effort on defense.  The Hurricanes used full-court pressure for almost the entire game, forcing 22 Tech turnovers.  Also, the pressure led to the Yellow Jackets scoring only 52 points, 19 under their season average.

Miami built an 11-point lead only eight minutes into the game, but Georgia Tech battled back behind senior Janie Mitchell to tie the game at 24 heading into the half.

Mitchell led all scorers with 19 points, but with 18 seconds left in the game, she was trapped by the Miami defense on an inbounds pass along the Hurricane baseline.  Mitchell tried to reach her teammate near half court but her pass sailed out of bounds, allowing the `Canes their last second shot.

Miami will remain home for a meeting with Virginia Tech, Monday, Feb. 11 at 7 p.m. at the BankUnitedCenter.  The game will be aired live on FSN South.