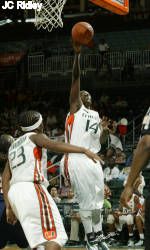 Miami Look to Take Sting Out of Georgia Tech

In their last game against Clemson, the Hurricanes relied on their seniors to lead them to a 66-61 victory.  Maurita Reid led all scorers with 23 points, while Carla Williams had her best game of the season with 14 points and rebounds.  Albrey Grimsley also made a clutch game-winning jumper with only 11 seconds in the game.

Georgia Tech is a strong 14-2 on the season with losses their two losses only coming to ranked teams, Georgia and North Carolina.

Senior forward Janie Mitchell leads the Yellow Jackets with 17.1 points per game, with teammate Chioma Nnamaka right behind her with 16.2 points per contest.

The Hurricanes hold a 6-5 all-time record against the Georgia Tech Yellow Jackets, dating back to Dec. 12, 1980.

The Yellow Jackets have won four straight in the series, including three times a season ago.  Two wins in the regular season and once in the ACC Tournament.