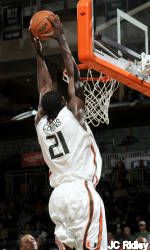 CORAL GABLES, FLA. – After one week out of the polls, the University of Miami men’s basketball team is back among the nation’s elite, ranked No. 25 in the AP Top 25 Poll released today.

In the ESPN/USA Today Poll, Miami earned enough votes to come in at No. 27.

The Hurricanes open ACC play ranked for the first time in school history this weekend, as they play host to Georgia Tech (7-6, 0-1 ACC) on Sat., Jan. 12, at home at the BankUnited Center at 2 p.m. Miami trails the all-time series 4-3, however the Hurricanes have won two straight over the Yellow Jackets, including a 90-82 victory in their last meeting on Dec. 3, 2006, in Coral Gables.

The game will be carried live on radio by 560 WQAM and on television by Raycom Sports, including WBFS in the Miami area. For a full listing of Raycom affiliates nationwide, please visit RaycomSports.com.