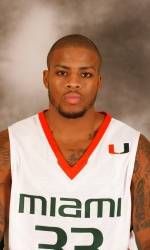 CORAL GABLES, FLA. – University of Miami junior guard Jack McClinton was named ACC Player of the Week after helping the Hurricanes to 64-58 road win over Mississippi State on Thursday.

In earning player of the week honors for the first time this season and second time in his career, McClinton scored a season-high 29 points at Mississippi State as the Hurricanes improved to 9-0 on the season.

With the Hurricanes trailing 56-51, the Baltimore, Md., junior knocked down three three-pointers and converted a pair of free throws in the final 3:22 to lead Miami to the comeback victory. For the game, McClinton hit on 11-of-22 from the floor, 5-of-10 from three-point range and 2-of-2 from the line.

Wake Forest’s Jeff Teague was selected as ACC Rookie of the Week after scoring a game-high 16 points in Wake Forest’s 72-56 defeat of Bucknell on Sunday.

McClinton and the No. 22 Miami men’s basketball team returns to competition tonight at the BankUnited Center, kicking off a three-game homestand versus Stetson at 9 p.m.