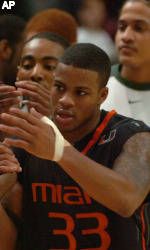 Coral Gables, FLA (www.hurricanesports.com) – Junior guard Jack McClinton who scored 11 of his game-high 29 points against Mississippi State in the final 3:22 of the game leading the Hurricanes to a 64-58 win over the host Bulldogs on Thursday, December 13 has been named the Muscle Milk Student-Athlete of the Week for the period December 10-16.bThe 29 points were also a season high for McClinton.

On the year, McClinton leads the Hurricanes in scoring averaging 14.6 points per game. He is connecting on 3.0 three-pointers per contest to pace the Atlantic Coast Conference in that category. With the win, the Hurricanes improved to 9-0 on the season and are one of just 14 Division 1 schools to remain undefeated this season.