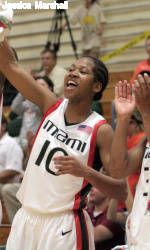 Despite out-shooting their opponent by 21, the Hurricanes could only convert on 25 percent of their shots in the game. Miami also forced 21 turnovers, eight of them Maurita Reid steals.

Reid led all scorers with 17 points in the contest, 13 coming in the second half. Reid is having a great season on both ends of the floor, as she leads her team with 15.2 points and she also has 38 steals on the year.

The Ole Miss Rebels made just over 50 percent of the shots on the night, proving to be the difference. Four players scored in double figures for the visitors, led by Kayla Melson’s 14.

The opening minutes of the game were an early indicator for the outcome as Ole Miss made their first four shots from the field and the `Canes missed their first five.

Miami travel to Cancun, Mexico for the Caribbean Classic Dec. 18-19 where they will open with Southern Mississippi on Tuesday and then face no. 8 LSU. Game times are set for 1 and 3:30 p.m. respectively.