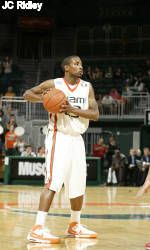 Coral Gables, FLA (www.hurricanesports.com) – Sophomores James Dews and Dwayne Collins, who each scored a team-high 14 points in the Hurricanes 67-53 win at FIU Saturday have been named the Muscle Milk Student-Athletes of the Week for the period December 3-9.

The win over FIU improved Miami’s record to 8-0 on the season, their best start since going 14-0 in 2001-02. The Hurricanes return to action at Mississippi State on Thursday at 8pm Eastern Time before returning home to face Stetson at the BankUnited Center at 9pm on Monday, December 17.