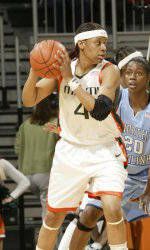 Hurricanes Hold on in Win Over Central Florida

For the second time this season, Lamese James recorded a double-double, this time scoring a career high 14 points with 12 rebounds. At the break, the junior led all scorers with 13 points and was only one rebound away from getting a first half double-double.

Maurita Reid found herself in foul trouble for the second straight game. The senior guard played the final 9:49 with four fouls and still was able to keep tight defense against the UCF backcourt. Reid’s jumper with 3:10 to go broke a 53 all tie and gave the Hurricanes a lead that they would never relinquish, she finished with 14 points.

The Hurricanes averaged 6.7 three-pointers per game coming into today’s game but were only 2-20 from long range today and shot only .314 from the field overall.

UM’s poor shooting allowed Central Florida back into the game in second half as the Knights were able to once again come from a deficit, this time tying the contest at 53.

Miami opened the game with a 14-2 run before the Knights clawed back to within one at 22-21 at the three-minute mark of the first half. James stepped up over the final minutes of the half, grabbing rebounds and adding four points as the `Canes closed out the half on an 8-1 run, and led 30-22 at the break.

Junior Latoya Drake only had six points, but all of them came in a two-minute span early in the second half when it seemed like the forward was the only one able to keep off the charging UCF squad.

D’Nay Daniels led all scorers with 15 points for Central Florida. Her teammate Tia Lewis was only a bucket away from a double-double as she had 11 boards and eight points before fouling out late in the second half.

Miami will play Tuesday night at the BankUnited Center against cross-town foe Florida International at 7:00 p.m., in the second of four straight home games.