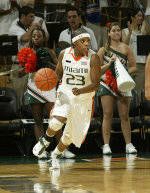 Milwaukee, Wis. – – The University of Miami women’s basketball team (3-3) won an entertaining game against the Panthers of Wisconsin-Milwaukee (1-3) by a 73-70 score in overtime at the Klotsche Center.

Both of Miami’s captains played huge roles in the victory, with LaToya Cunningham scoring a career-high 17 points and Albrey Grimsley adding 13.

Cunningham also tied a career high with four three-point field goals, none more important than the one in overtime that pushed UM’s lead to 70-66 with 53 seconds left.

The Hurricanes built a seven-point lead with only 2:36 remaining in regulation and UW-M eventually tied the game on, Traci Edwards’ two free-throws with only eight seconds to go. Edwards, The Horizon League’s Preseason Player of the Year ended the game with 21 points and 10 rebounds, right at her season average.

Maurita Reid’s three-pointer at the buzzer rattled out sending the game into overtime.

Overtime was an adventure for the `Canes who lost three players via the foul-out, starting with Reid and followed by Grimsley and Lamese James. With three of her scorers out of the game, Head Coach Katie Meier relied on the play of freshman Briyana Blair and Epiphany Woodson to pick up the slack, each scoring seven points.

Blair played great defense as she had a hand in three of the UM’s 18 steals and Woodson sealed the game, making one of two free-throws extending the lead to four with 32 seconds left in overtime.

The first half went back and forth between the two teams and each led by as much as six points at one point in the opening period. Cunningham led all Miami scorers at the break with 10 points and two three-point baskets.

The Panthers’ Aubri Rote led all scorers at the half with 13 points, nine of which came from behind the three-point arc, she finished the game with 18 points.

The Hurricanes return to the BankUnited Center this Sunday as they face Central Florida, Sunday at noon.