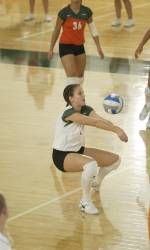 CORAL GABLES, Fla. – The University of Miami volleyball team will wrap up its 2007 season this week with home matches the day before and the day after Thanksgiving against North Carolina and N.C. State at the Knight Sports Complex. The Hurricanes will face the Tar Heels Wednesday at 4 p.m. before hosting the Wolfpack on Friday at 1 p.m. Prior to the start of Friday’s match, UM seniors Michelle Bruin and Ciara Michel will be honored during a Senior Day ceremony.

UM (12-17, 6-14 ACC) enters its final week of the year having won three of its last seven matches. After splitting matches the previous three weekends, Miami dropped both of its matches this past weekend at Clemson and at Georgia Tech. UNC (15-14, 11-9) has won six of its last seven with its lone loss since the start of November coming in its most recent match at Duke this past Sunday. N.C. State (3-27, 0-20) is still in search of its first league win and first win since a 3-1 over Loyola back on Aug. 25. Both matches this week will be broadcast live via ACC Select at www.ACCSelect.com.

“We’re looking forward to playing North Carolina on Wednesday,” head coach Nicole Lantagne Welch said. “We are due to peak and we want to make this a special week for our seniors.”

Cassie Loessberg made history on the road this past weekend when she passed Jamie Grass in becoming the school’s all-time single season dig leader. Early in the second game against Clemson on Friday, Loessberg tallied her 500th dig of the season, passing Grass’s 2002 mark of 499. Heading into this week’s final two matches, Loessberg has 524 digs while her 4.90 digs per game average ranks fifth in the ACC.

Genny Mayhew also reached a milestone over the weekend when she recorded her 400th dig of the season against Georgia Tech on Sunday. She leads the team with 404 kills and ranks eighth in the league with a 3.85 kills per game average.

About North Carolina
Christine Vaughen leads the offensive attack for the Tar Heels, hitting a team-best .335, the fifth-highest mark in the league, in recording 261 kills this season. Lauren Prussing is averaging a team-best 3.08 kills per game and needs just seven more kills to reach 300. Stephanie Jansma runs the offense for UNC, tallying 1278 assists (11.51 pg) in addition to leading the club with 22 aces. Brianna Eskola is the defensive leader for the Tar Heels, averaging a league-best 5.84 digs per game while Jansma and Ashley Board have recorded 282 and 270 digs respectively. Heather Brooks is one of the ACC’s top defenders at the net, ranking third in the conference with a 1.44 blocks per game average.

About N.C. State
Lauren Zaniboni leads N.C. State in games played (104), kills (320), kills per game (3.08) and attack attempts (1,060) in addition to ranking second in total blocks (74). Chrissy Zirpolo is the only other Wolfpack player to have recorded at least 200 kills, having recorded 219 thus far. Zirpolo leads the team with 23 assists an ranks third on the team with 250 digs. Alex Smith is usually running the N.C. State offense and has 815 assists (8.23 pg) while Allison Davis has chipped in with 159. Defensively, Nikki Sweet’s 288 digs leads the team while Ashley Wallace is just four total blocks away from 100 on the year.

Fans can also follow both matches this week via GameTracker at www.hurricanesports.com. To access GameTracker, visit the team’s schedule on the Miami volleyball page.