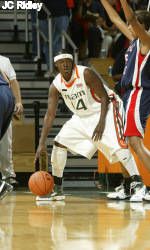 CORAL GABLES, Fla. – – The University of Miami women’s basketball team continues a five-game homestand when the Hurricanes host Michigan Monday evening at the BankUnited Center in the Big Ten/ACC Challenge.

Miami (1-1) looks to bounce back after falling at home to Jacksonville, 72-64, last Tuesday. Senior guard Maurita Reid scored 19 points and grabbed a career-high 13 rebounds. Reid leads the team averaging 20 points and 11 rebounds per game. She picked up here fifth career double-double in the loss to the Dolphins. Sophomore forward Charmaine Clark is second on the team averaging 11.5 points per game. Four players scored in double figures for Miami against JU. Junior guard LaToya Cunningham has a team-high 16 assists.

A Look at Michigan
The Wolverines (2-0) bring an unbeaten mark into the Big Ten/ACC Challenge with the Hurricanes. Michigan has wins over Akron (67-55) and Cincinnati (55-46). Krista Phillips, a 6-foot-6 sophomore center, comes off the bench to lead the Wolverines in scoring averaging 13.0 points per game. She scored 17 points in the win over Cincinnati. Guard Janelle Cooper and forward Ta’Shia Walker each are averaging 9.5 points for Michigan. The Wolverines are shooting 41.9 percent from the field as a team. Cooper is the team’s leading long range threat. She is shooting 54.5 percent from three-point range, connection on 6-of-11 three-point attempts.

The Series
Miami is 1-1 all-time against Michigan. The teams played last December with the Wolverines winning, 60-55.

Up Next
Miami hosts the UM Thanksgiving Tournament as UM welcomes Fordham, Butler and Monmouth to the BankUnited Center this weekend. Miami will face Fordham at 7 p.m. Friday in the opening round.