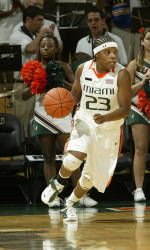 Jacksonville (1-0) won its season opener over Georgia Southern, 72-58. Guard DaVina Hamilton scored a game-high 19 points to lead four Dolphins in double figures. Courtney Jackson scored 16 points after going 6-for-9 from the field and 4-of-7 from three-point range. Virginia Gregoire added 13 points and Regina Omoite had 10 points. JU shot 45.5 percent from the field and 36 percent from long range.

This is the first ever meeting between Miami and Jacksonville.

Miami will take part in the ACC/Big Ten Challenge when the Hurricanes host Michigan next Monday, Nov. 19 at the BankUnited Center.