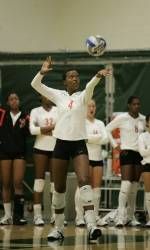 UM (9-12, 3-9 ACC), coming off a close loss to in-state rival Florida State Tuesday night, will look to sweep the season series against the Cavaliers and the Hokies after picking up a pair of 3-2 wins against them earlier this season in Virginia.

“We are looking forward to hosting Virginia and Virginia Tech this weekend,” head coach Nicole Lantagne Welch said. “They are both very strong teams and they both play very good defense. We will need to show a lot of patience and persistence and keep coming at them to win the long rallies and see a lot of success.”

Miami will take on Virginia Friday night at 7 p.m. with Virginia Tech coming to town Saturday night at 7 p.m. Both the Cavaliers (13-8, 8-4) and the Hokies (12-10, 6-6) have played well as of late with each having won five of their last seven matches heading into the weekend while UM, after defeating N.C. State Nov. 19, has lost its last two.

“The big thing for us right now is as we approach teams the second time around, we want to have improvements each time out and comparatively to the first time we played them,” Lantagne Welch said. “We had some great five-game battles that we came out on top of when we were in Virginia so we’re expecting some great matches here again this weekend.”

Ciara Michel had led UM offensively as of late, recording double-figure assists in each of the last three matches after having only done it twice in the previous 13. After recording 16 against N.C. State, she has continued to hit the ball well, recording 11 and 12 the last two matches against North Carolina and Florida State. Katie Gallagher is also coming off of one her better all-around matches this season, having collected 32 assists, 11 digs, five aces, three kills and two total blocks.

About Virginia
The Cavaliers are led offensively by Sarah Kirkwood, who paces five Cavaliers in triple-figure kills with 371. She also leads the team in service aces (51) and hitting percentage (.265) while ranking second in digs with 266 behind Melissa Caldwell’s 298. Katie Oakes is the top player at the net for UVa with 103 total blocks while Kelly Irvin and Marlow Bruneau lead the offense with 607 and 350 assists respectively.

About Virginia Tech
Taylor Parrish and Felicia Willoughby lead the Hokies with 275 and 202 kills respectively while Willoughby’s .264 hitting percentage is also tied with Kristen Cunningham’s for the team-lead. Michelle Lang leads the VT offense averaging 11.71 assists per game while Amanda Cloyd heads six Hokies in triple-digit digs with 440 (5.37 dpg). In addition to Willoughby’s contributions offensively, she also leads the club with 114 total blocks.

Friday night’s match against Virginia will be broadcast live via ACC Select at www.ACCSelect.com. Fans can follow both matches via GameTracker at www.hurricanesports.com. To access GameTracker, visit the team’s schedule on the Miami volleyball page. The Hurricanes’ match againt UVa can also be heard live on the University’s student network WVUM 90.5 FM. For tickets, contact the Hurricane ticket office at 1-800-GO-CANES.