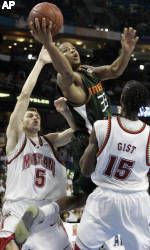 Coral Gables, Fla. (www. hurricanesports.com) – – The University of Miami Athletic Department has announced that men’s basketball season ticket prices for the 2007-08 season will not increase for any section and will be lowered in some areas of the BankUnited Center.

Some highlights of the new ticket pricing are:

There is no price increase in any section of the arena.
Total prices (including season ticket and required donation) have been reduced in the following prime side-court areas:

General Admission seating has been reduced more than 50 percent, from $199 to $99 per seat. The amount of persons included in a Family Plan, priced at $475, has increased from two adults and two children to two adults and three children.

“The intention of our season ticket pricing is to allow even more fans to be exposed to ACC basketball,” said UM Athletic Director Paul Dee. “The ACC offers the best of college basketball and our goal is to enhance awareness of the men’s basketball program and introduce our product to more people.”

Head Coach Frank Haith added, “Fan support is vital to the success of any team. We are excited about the upcoming season and are looking to build on the success we had at the ACC Tournament. With the maturity of our returning players, the return of Anthony King from injury (wrist) and the early performance of our newcomers, I am confident we can put a very competitive team on the court.”

Season tickets may be purchased online at hurricanesports.com, at the Hecht Athletic Center ticket office or by calling 305-284-CANE in Miami-Dade County or 1-800-GO-CANES outside of Miami-Dade.