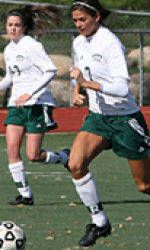 The two-time New Jersey Player of the Year was among eight forwards on the 22-member U.S. U-20 team to travel to College Station, Texas, in late March to compete in six matches – including three versus college teams in the midst of their spring seasons.

Head U.S. U-20 coach Jillian Ellis continues to work with the player pool with a focus on qualifying for the 2008 FIFA U-20 Women’s World Cup to be held in Chile. Players born on or after January 1, 1988 – such as Steinbruch – are eligible for the next U-20 World Cup.

The 5-7 Steinbruch will enter the University of Miami in the fall as a member of the 2007 recruiting class. She put together a strong prep campaign, including 63 goals and 63 assists in the last three seasons with Ramapo High School. She led the team to the 2006 state championship, as well as three straight sectional titles.

A three-time member of the New Jersey Olympic Development (ODP) team, Steinbruch has also played club soccer with the PDA Fury since 2001, winning various tournaments, including both the New Jersey State National Series and Las Vegas College Showcase in 2006.