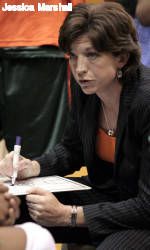 CORAL GABLES, Fla. – In the University of Miami’s third year as a member of the Atlantic Coast Conference, the Hurricanes will take on the Yellow Jackets of Georgia Tech for the third-straight time in the opening round of the ACC Women’s Basketball Tournament. Thursday’s meeting will also mark the third meeting between the teams this season, with the `Canes looking for their first win over the Yellow Jackets in 2006-07.

Miami is led by All-ACC Second Team selection Renee Taylor, the ACC’s leading scorer with 18.8 points per game. With a 20-point performance in the `Canes’ regular-season finale versus N.C. State, the 5-2 senior guard surpassed the 1,000-point milestone in just two seasons and stands at 19th among UM’s scoring leaders with 1,011 points.

Taylor’s supporting cast includes junior guard Maurita Reid who leads the ACC with 3.3 steals per game, while also averaging 14.7 points — 10th best in the league — and a team-high 6.1 rebounds per game to rank 19th in the ACC. Both Taylor and Reid rank among the ACC’s top five in three-pointers per game. Freshman forward Charmaine Clark, who has emerged as one of the league’s rising young players, has been a starter in 19 games this season and is averaging 11.0 points and 6.2 rebounds in the last 10 ACC games.

The Series
Thursday marks the 11th meeting between Miami and Georgia Tech, the eighth since Miami joined the ACC and the third between the teams in the first round of the ACC Tournament. Although the Hurricanes have dropped both games to the Yellow Jackets this season, Miami owns the 6-4 all-time series lead, while the teams have split (1-1) their previous postseason meetings.

Watch Live on ACC Select
Thursday’s game will be broadcast exclusively via streaming video on ACC Select at www.accselect.com. Hurricanes fans can purchase a Single Event Pass ($3.99 per event) or an All Event Pass ($5.99 per month) which allows unlimited access to games. In addition, for the first time in league history all of the 2007 ACC Women’s Basketball Tournament games will also be broadcast nationally in its entirety on XM Satellite Radio channel 193.