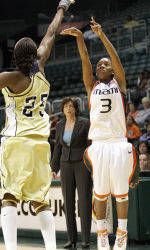 Coral Gables, Fla. – Janie Mitchell scored a game-high 22 points and Chioma Nnamaka added 21 to lead the Georgia Tech women’s basketball team past the University of Miami, 66-45, on Thursday evening at the BankUnited Center.

The high-scoring duo combined for 43 points – just two shy of the total UM offensive output, which was the third lowest scoring performance for the Hurricanes this season. Georgia Tech’s press continued to frustrate Miami, who turned the ball over 17 times and managed just 21 first half points.

The Yellow Jackets controlled the boards with the 44-30 advantage in rebounding and shot 44.4 percent for the game, while the Hurricanes connected on just 33.3 percent of their field goals.

Clark hit a three-pointer to open the second half and Taylor added another pair of threes to bring the Hurricanes within five points, trailing 39-34, with 13:29 to go. But a 17-5 Yellow Jacket run over the next eight minutes gave Georgia Tech the 56-39 lead – a deficit too large for the `Canes to overcome.

Taylor led Miami’s effort with a team-high 17 points, including a game-high five three-pointers, while Clark finished just shy of a double-double with 11 points, nine rebounds and a career-high four assists.